At some point in the past, our house has undergone a series of renovations to combine three small rooms into open plan living. While we really enjoy the bright spaciousness of our main room, having it open to the hallway meant that we couldn’t shut off this part of the house to separate out heating and cooling zones.

The benefit of separate heating and cooling zones is that you only have to heat or cool part of your house instead of the entire building. By only adjusting the temperature in the part of the house that you are using, you can save a significant amount of money on heating and cooling costs, and the energy use that goes with it. 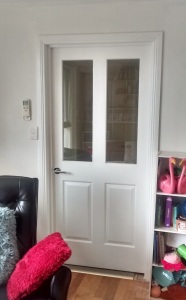 We were able to separate our main living area from the hallway by rebuilding the wall that had originally separated the two spaces. This was the wall where the cornice had fallen down, leaving a gaping hole in the ceiling. It was an opportunity to create something better than what had been there before, so we widened the doorway and chose a door with glass panels to retain the natural light in our hallway.

The whole project cost us approximately $600 to complete, and it has made such a difference to the temperature in the house. On colder nights we shut the door, and the heat generated in the kitchen is enough to keep the room warm. During a recent hot spell we kept the door shut, and it stopped heat from flowing through our large, north facing windows into the cooler bedrooms. This passive difference isn’t huge, at only one or two degrees, but already it has been the difference between running the gas ducted heating system and not running it.

…are you able to create zones in your home to reduce the amount of energy required to heat and cool the space? Please share in the comments below the approach you took and the results you achieved.

One thought on “Create Heating and Cooling Zones”