Last year in October we set up our worm farm. As with many projects in our lives, this was one where the amount of love and attention it received started out with great enthusiasm and then dwindled rapidly. We got lazy about flushing the farm with fresh water, feeding them became erratic once we got the chickens, and honestly I’ve spent the past few months convinced that they’re all dead.

The soil at our new property can best be described as a sandy disaster. In three months of exploring the garden, we have found a single wild worm. We’ve spent weeks digging out building rubble from what was probably intended to be a garden bed, and there hasn’t been a scrap of organic matter in the mix that we didn’t dump there from cleaning the chicken coop. “Barren wasteland” springs to mind as an appropriate description.

We really needed Schrödinger’s Worms to be in a living state.

I chose a day when I was home alone to tackle the worm farm. After a few years of gardening I’m finally at a point where I can handle touching a worm if I’ve got gloves on, but the idea of sorting through trays full of live worms was seriously creeping me out. I also don’t handle dead things well, and I knew there was bound to be a bit of squealing involved either way. No witnesses seemed ideal.

The first step was taking off the lid and cautiously peering in. There were plenty of worms on the lid and around the edges, so I shoved the lid back on and tried to lift out the first tray. It was heavy, and there was no way that I was getting it out full. I grabbed a bucket, put on my big girl pants, and started pulling out the food scraps at the top.

After about 30 seconds it was obvious that the bucket strategy was an epic fail. The farm isn’t big, but the worms were compacting the material in those trays beyond my wildest expectations, and moving it was just aerating it. This called for a wheelbarrow, but at this point I was covered in worms and not sure how to move the wheelbarrow without killing them all. Wiping my gloves on the grass seemed to do the trick, and I got the top tray empty enough to pull it out of the farm. 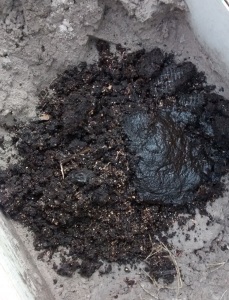 Inside the bottom tray was amazingly rich, black compost that seemed to be half compost and half worms. I had planned to try and put most of the worms back into the worm farm, but there were just so many that I didn’t bother. I scooped out the goo that had fallen into the collection tray, put the working tray back into the farm, and dumped the finished tray into the garden bed. Once it was empty I put it on top of the worm farm, transferred the scraps from the wheelbarrow back into it, and put the lid back on.

I was a bit dismayed by how little coverage I was able to get from the tray in the worm farm. In our previous garden that much compost would have fertilised an entire bed, but here I was barely able to spread it over half a square metre before the organic layer became too thin. This compost will be incredible for our garden once we’ve established it, but to begin with we’re going to need to bring out some bigger guns.

…have you gone beyond creating a compost heap or worm farm to actually using the compost that it produces? Please share in the comments below how these processes have changed your garden.