When you’re a first time parent, one of the popular games to play seems to be calculating how many nappies you’re going to be changing during your baby’s early years. For most parents the pain point seems to come in the form of either bodily fluid or money that is basically getting flushed down the toilet. According to the folks over at lovetoknow – who clearly spent far too much time playing with the diaper planner – a baby will go through 2,500 disposable nappies in their first year and 1,500 – 1,800 disposable nappies every year after that until potty training is finished.

As if the pain of spending so much money and the pain of what on earth have you eaten?!? isn’t bad enough, there is an environmental impact to nappy usage. Reusable nappies take 0.3-0.5GJ of energy per year per infant, and disposables bump that up to 1.2-2.5GJ per year, according to the Australian Nappy Association. Add in all of the other environmental costs to nappies, and keeping baby clean and dry can feel like an enormous ask.

Fortunately, there is an alternative to using this many nappies that doesn’t involve leaving your child in their own filth or sending them outside to run around naked all day. This is where elimination communication comes in. Popping your baby straight onto the toilet or a potty is quick, easy, and requires considerably less cleaning and waste than waiting until the mess is already there. 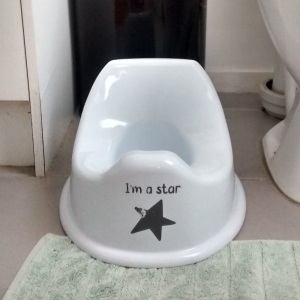 When most people hear about elimination communication for the first time, they immediately think of early toilet training. It isn’t that at all, unless you think of early toilet training as training yourself instead of training baby. The general idea is that you become attuned to your baby’s needs and learn to read their signals when they need to go and make sure they have a chance to get there before it’s too late. If you don’t read them correctly then it’s no harm, no foul. You aren’t trying to be perfect, you’re just trying for a success rate higher than zero.

Our household can be chaotic and hectic on a good day, and we stand little to no chance of picking up on the signals from our baby all of the time. However, every kid has predictable times, and ours is no exception. Babies always need to go when they wake up from a nap. Some of them like to go right after a big feed, when you’re half way through putting a clean nappy on them, and about 20 seconds into the climactic fight seen at the end of your movie.

By giving our baby a chance to potty at the times when she is most likely to need it, we can typically reduce our nappy usage by several nappies every day. If you can cut back by just one nappy a day, that’s 365 nappies each year. For cloth that is quite a few loads of washing. For disposables, that’s a fair whack of cash. For the environment, it’s a priceless gift.

… how much can you cut down on nappies by gently helping your baby to use a potty before you start toilet training? Please share in the comments below if you’ve tried this with your baby and how it went.